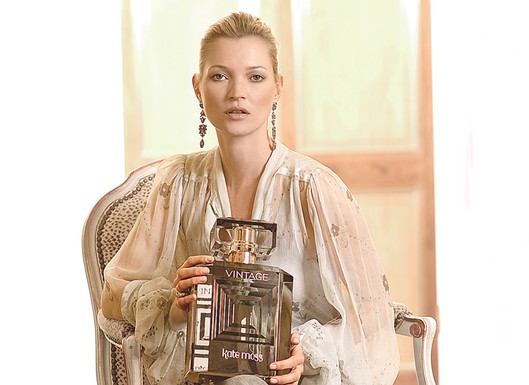 I don't like perfume, but I enjoyed Kate Moss' perfume interview with Women's Wear Daily. Kate Moss sat down with Brid Costello to discuss her new scent Vintage, which was introduced in Europe earlier this month.

On the fragrance’s genesis, “I couldn’t really afford designer clothes when I was young, so I just went to the secondhand shops. It wasn’t called vintage then, It was called ‘secondhand’ when I was 15.”

On defining beauty:
“it sounds really corny, but I think that if you’re beautiful inside, it shows on the outside for sure. You can be a pretty face, but if your not a nice person it just doesn’t work. I’m not traditionally a beauty, but apparently people think I’m all right. If you’re a nice person, it definitely helps.”

On if she has a motto:
“There are loads. There’s 'Nothing tastes as good as skinny feels.' That’s one of them. You try and remember, but it never works.”

On the secrets to multitasking:
“I think women are really good at multitasking. Men just cannot do it. My boyfriend cannot talk on the phone and [answer] if I ask him a question or get dressed at the same time. I can do all of that – talk on the phone, answer a question, get dressed and put my makeup on all at the same time. Women just do, don’t they? I think it’s something to do with babies. When you have a child, you have to be able to multi task."

Beyond perfume and Moss' personal beliefs, Stephen Mormoris, svp of global marketing at Coty said
they may look into having Moss create a special color cosmetics
collections for its Rimmel brand, which Moss also fronts.