Nanette Lepore To Save The Garment Center 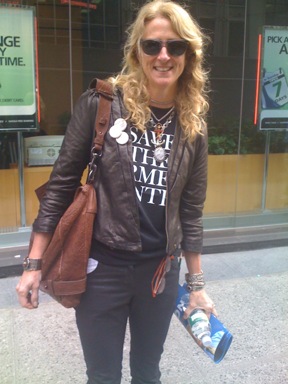 Last week the fashion district in New York held a spirited rally to save the garment center. Held near the Needle and Button statue, the crowd of 600-800 people listened attentively to Controller Bill Thompson, City Council Speaker Christine Quinn, and Designer Nanette Lepore speak about bringing legislation to promote production in the garment center and honor the city zoning for manufacturers.

From what I read in the Examiner, I was a little confused as to what the solution was. At the beginning of the article it states:

"In 1987 Ed Kotch zoned the side streets of the garment district to remain fashion-manufacturing facilities. With 200,000
jobs in the garment center at that time the impact of rents chasing out
manufacturers would be devastating to the community and unemployment
deficit. As times have changed and more companies outsource production can we still rationalize this zoning? 'We continue to lose jobs, zoning isn’t an effective mechanism for job preservation. It continues to diminish' [Barbara Randall President of the Fashion Center] says. What
can we do that is meaningful? Everyone claims that the rents are too
high but yet Randall tells me the garment center has the lowest rents
in Manhattan."

After reading that jumble of concerns I assumed the rest of the article would go on to explain how to solve the problem, but the article and quotes seem to vary between zoning not being any help and then saying it is imperative, with no identification of how to get more work in the factories. Bad journalism or ineffective rally?

Either way If
the garment center loses its local manufactures it is likely to lose the trade altogether and eliminate the possibility of new or small local designers from producing their collections. Leaving fashionable Americans to wear the same old-same old or huge brands. It is also about the American workforce. Let's figure this out.